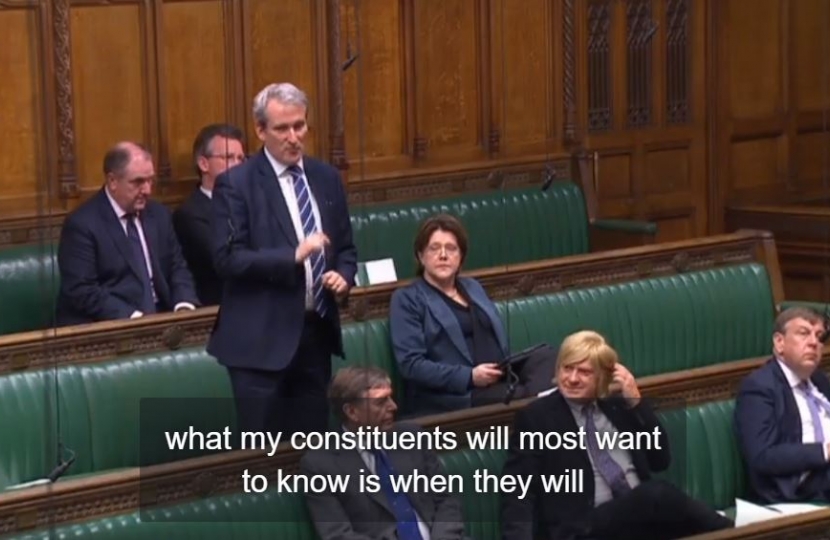 Damian has welcomed a new £1 billion deal brokered by the Government with mobile phone operators, that will tackle areas of poor mobile coverage locally and in other rural areas across the country.

The new deal will see the four main mobile providers – EE, O2, Three and Vodafone – working together to invest a network of new phone masts, as well as upgrading existing ones, that they can then all share, which will be known as the Shared Rural Network.

People will be automatically switched to the Shared Rural Network if they enter a part of the country where their own network would not otherwise have good mobile coverage - known as a ‘not-spot’.

The move will bring 4G coverage to 95 per cent of the UK by 2025 and under the deal, the four operators will invest a total of £530 million to open up and share existing masts and infrastructure to improve almost all partial not-spots. The Government will then commit up to £500 million to eliminate total not-spots – those hard-to-reach areas where there is currently no coverage from any operator.

“We know there are parts of East Hampshire with poor mobile coverage, and I’m pleased this deal will see more residents and local businesses get access to 4G, no matter where they live or which provider they’re with. And this will be particularly beneficial for those keen to get online from their phones.

“Also critical is the faster rollout of gigabit broadband access announced recently by the Government, which is so important for many people living and working locally.”

The government’s ambition is to deliver nationwide gigabit-capable broadband as soon as possible. 70% of premises can now access the fastest broadband speeds available, and the UK is on track for 85% gigabit coverage by 2025, and then push further towards 100% coverage.