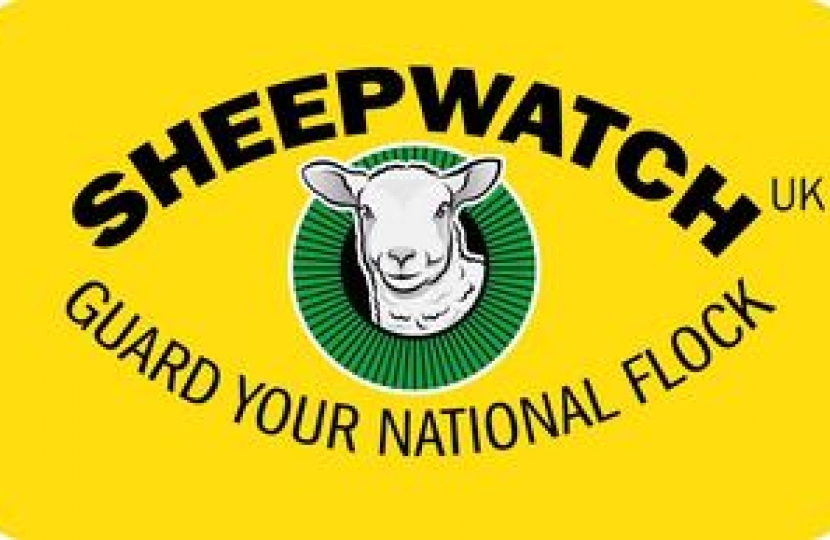 The article below was written by Damian and published in this week's editions of the Herald and Petersfield Post:

"Our love of pets, and of dogs in particular, is very much part of the British culture and way of life, and ownership of pets has certainly increased as people have spent more time at home during the pandemic.

But even the most considerate and well-meaning dog owner can fail to control their pets when out walking in the countryside, perhaps believing their pet incapable of harming livestock or that it would return when called.

Sadly we have seen an increase in dog attacks on sheep and other livestock, and the impact this has on the emotional and financial well-being of farmers, as well as of course the distress and damage to the animals themselves is significant.

This is I know a very real issue for farmers and landowners across East Hampshire and many other rural areas.

Local shepherdess Terena Plowright continues to lead a community response through the Sheep Watch UK organisation she formed, and I was pleased to support the conference she organised a few years ago to raise awareness of the issue and to promote steps that can be taken to address it.

Unfortunately the trend continues, with figures from the NFU showing the number of dog attacks on farm animals rising by an estimated 50 per cent during the first quarter of 2021. and it is right that further action is taken to address this.

The UK has a world-leading record on animal welfare, and over the last decade the Government has introduced a range of measures to ensure animals are offered the care, respect and protection they deserve.

This includes raising the maximum custodial penalty for animal cruelty offences from six months to five years, and the decision to formally recognise animals as sentient beings in domestic law.

And in June this year, new measures to crack down on livestock worrying were introduced in England and Wales through the Kept Animals Bill, seeking to update existing legislation that dates back to 1953.

The improved powers enable the police to respond to livestock worrying incidents more effectively - making it easier for them to collect evidence and, in the most serious cases, seize and detain dogs to reduce the risk of further incidents.

But there has been a call for more to be done, and I was pleased to support the Ten Minute Rule Bill presented in Parliament in July by Virginia Crosbie MP, which aims to build on the measures already announced.

Education remain important too, as some pet owners remain unaware that their pets are capable of injuring livestock. Even if a dog doesn’t make physical contact, the distress and trauma of the chase can cause sheep to die or miscarry, with other incidents leading to sheep drowning in rivers, falling from cliffs or getting trapped in fencing.

A new and refreshed version of the Countryside Code was launched in the spring this year – the first in over a decade – aiming to help people enjoy the outdoors in a safe and respectful way.

The advice highlights the need to keep pets under control, to stay on footpaths and not to feed livestock, horses or wild animals. It also makes clear that the code applies to all natural places, including parks and waterways, coast and countryside.

There is much we can do to prevent the suffering caused to animals and the anxiety inflicted on farmers, by being more aware but also being prepared to act when necessary to ensure our pets remain under control when near to livestock."

"Pet theft has been the subject of press and social media coverage during recent months but it does thankfully remain relatively rare.