Romance fraud - protecting yourself and others 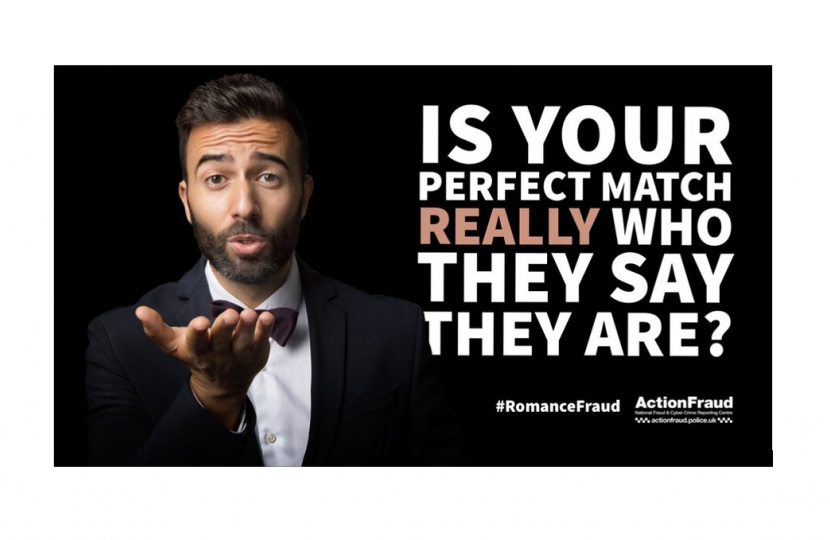 "Romance and fraud are two words that do not belong together.  But we are seeing a growing trend in this type of deception, not only by opportunistic individuals but also by the calculated and organised efforts of criminal gangs.

A new survey ahead of Valentine’s Day found that almost two in five people who have dated someone online have been asked for money, with many giving or lending the money when asked.

New figures from Hampshire Constabulary show that residents across the county and the Isle of Wight lost £3.1million through dating scams between November 2020 and October 2021, with a total of 262 reports during the twelve month period.

Residents aged between 50 and 59 were the most at risk of romance fraud, with more than a fifth of all victims in that age bracket, followed by people aged between 60 and 69. But people in their twenties are victims too.

Criminals use a range of tactics to get victims to transfer money without it raising suspicion. Their stories are often quite plausible, particularly as the online relationship develops, including funds to enable travel or for emergency medical expenses.

The reality however is that the person is likely to be using a fake profile to build a relationship to gain the trust of someone who may be lonely or vulnerable.

Technology has altered our lives in so many ways, including how we meet and date, and that has of course been magnified during the pandemic. We may be more connected than ever before, but communicating via online platforms does present greater opportunities for fraudulent and misleading activity.

There are ‘red flags’ that should make us suspicious, whether for ourselves or on behalf of friends and family, particularly if the individual has not been met in person.

Any request to send money or to transfer money on someone else’s behalf, providing copies of personal documents such as passports or driving licences, purchasing and providing codes for gift cards or sending parcels on behalf of another person should all be regarded with hesitation.

Fraudsters may ask the victim to come off the dating platform where they met and use a different messaging service so they can’t be monitored or easily reported.  That’s often an early warning sign.

There are practical steps that can be taken to help protect against this type of fraud. Ensuring adequate privacy settings on social media accounts helps prevent strangers getting access to personal information. A ‘reverse image search’ (go to Google Images and click on the camera icon) can sometimes help identify whether a photo has been taken from somewhere, or someone, else.

If you think you, a friend or a family member has been a victim of romance fraud or a romance-based scam, then it is important to contact you bank immediately and report it to Action Fraud on 0300 123 2040 or via actionfraud.police.uk.

Online fraud is an important part of my brief as Security Minister, and I would encourage everyone to stop and consider whether a situation is as genuine as it may appear – to pause and think if everything you’re being told really does make sense.

For more information on how to protect yourself and others against fraud, go to: www.damianhinds.com/campaigns/tackling-fraud"

As part of his brief as Security Minister, Damian is chairing the new Joint Fraud Taskforce (JFT), which brings together experts from the most vital sectors to prevent perpetrators from exploiting vulnerabilities and fraud controls to conduct their criminality.