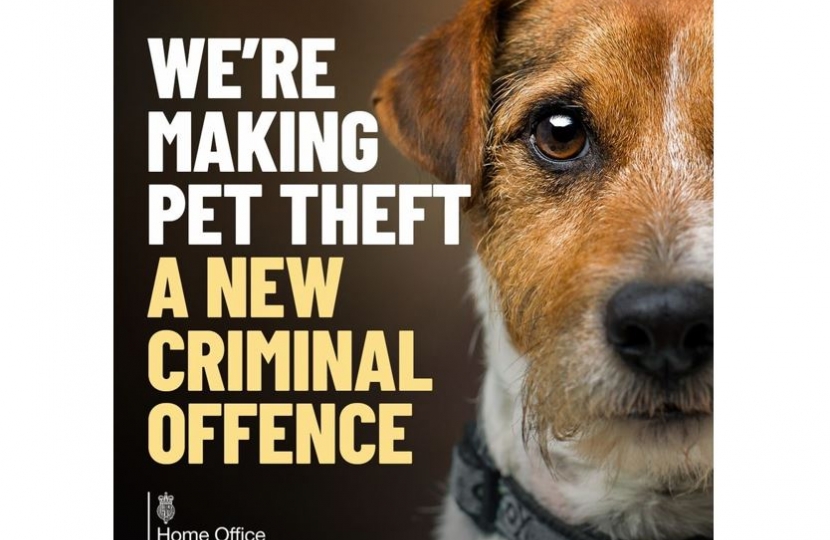 "Pet theft has been the subject of press and social media coverage during recent months but it does thankfully remain relatively rare.

Estimates suggest that around 2,000 incidents of dog theft were reported to police forces across England and Wales in 2020, but in the context of an estimated population of 9.6 million dogs in the UK, the risk of falling victim to dog theft is still low.

With more people working from home during the pandemic, the demand for pets - and in particular dogs - has certainly increased; something which has been exploited by criminal individuals and groups.

The rise in reported dog theft incidents last year is in contrast to a decrease in total theft offences, and in response the government set up the Pet Theft Taskforce to gather evidence and recommend measures to tackle the problem.

Although Hampshire police has not seen pet theft reported to the extent that has been discussed and suggested online, the emotional distress caused by a family pet being stolen is undeniable.

While it is already a criminal offence to steal a pet, one of the recommendations that will be developed further is the introduction of a new pet abduction offence.

The taskforce also recommended looking at options to improve consistent recording and data collection of pet thefts by all police forces across England and Wales and government across the entirety of the criminal justice system.

This move would help to build a stronger evidence base to assess the scale of the issue, and also to understand how cases are being dealt with nationwide.

New requirements to register more details on dog microchip databases, as well as improvements on how the databases work, was another area of recommendation. This could lead to a single point of access and enable changes of keeper to be tracked more closely.

The taskforce’s report would also like to see sales platforms encouraged to implement more identity checks on sellers, to improve the traceability of sellers.

Some police forces are already trialling new voluntary forms of ID, such as DNA databases and forensic marking, that work alongside microchipping, and support for this is a further recommendation.

Hampshire Police’s Rural Countrywatch team have developed some simple crime prevention advice for dog owners. As well as ensuring pets are microchipped, with up to date contact details, the advice reminds owners to fit collars with tags that include their current contact details (and not the name of the dog).

Having up to date photos of pets, particularly to show any distinctive markings or features, is another useful tip. Social media can be extremely useful in circulating information about missing pets, and accurate images can certainly help efforts in tracking and reuniting pets with their owners.

The Pet Theft Taskforce’s report is part of the government’s commitment to further strengthening the UK’s position as a global leader in animal welfare, with Defra’s recently published Action Plan for Animal Welfare setting out aims, ambitions and planned reforms across animal welfare.

Since 2010, we have made microchipping mandatory for dogs, modernised our licensing regime for dog breeding and pet sales, and banned the commercial third-party sales of puppies and kittens. The government has also recently launched proposals to crack down on puppy smuggling and ban the import of dogs with cropped ears or docked tails, and the maximum prison sentence for animal cruelty has now been raised from six months to five years.

These are important measures and it is right that we take action to protect the welfare of animals here in the UK."

COP26 East Hampshire: What we do matters

This article was written by Damian and published in this week's edition of the Herald and Petersfield Post: