Dementia: not an inevitable part of aging 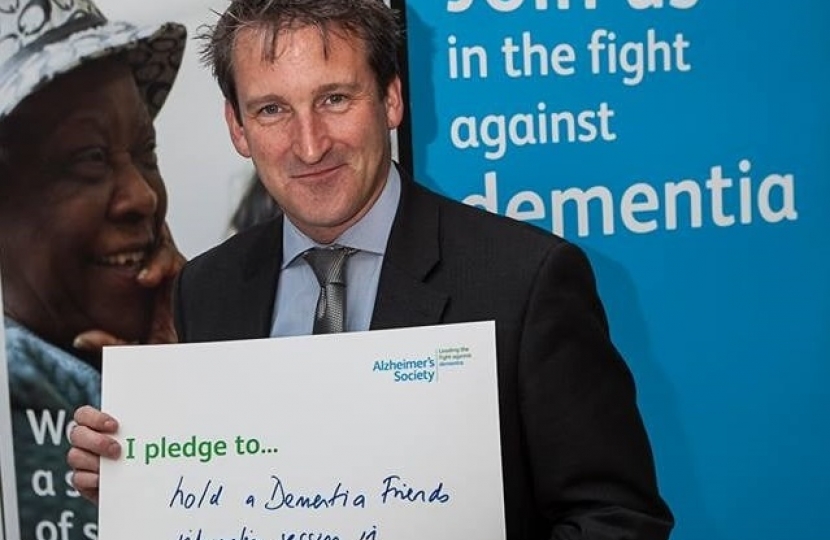 "In Parliament last week, the Social Care Minister said this was a ‘moment in time’ for action to support those living with dementia, saying that we must not see dementia as an inevitable part of aging.

The minister reinforced the government’s on-going commitment to improve the diagnostics, prevention, research and provision of care for people with dementia, acknowledging that around a third of cases are estimated to be preventable.

Affecting one in six people over the age of 80 and a significant number of residents in care homes, we know that an aging population means this is growing.

The Alzheimer’s Society estimates that more than 22,000 people across Hampshire are living with dementia, and that number is expected to rise to more than 31,000 by 2030 - with a national projection reaching 1.6 million by 2040.

That is why support within our local communities is so important. Launched in 2016, Dementia Friendly Petersfield is an initiative that works not only to raise awareness about dementia but also to provide practical help through its regular support groups.

The group will be running an information day on Friday 2nd July, at the United Reform Church in Petersfield, to promote the full range of support available in the town, which includes a friendship group, a music group and an entertainment group. Details about the Winton House Memory Café and the Petersfield Dementia Choir will also be available on the day.

Dementia-friendly Alton has also announced the return of their regular events including Legions Legends and Memory Lane Singing, as well as their Memory Café and Hearts and Minds Choir. The group has also teamed up recently with the Happy Healing Hut, to build and promote a wider framework of support for mental health and well-being, spanning the needs of the young as well as the elderly.

Dementia can be a very isolating condition, and not just for those living with it but also for their carers, so support groups like this can be a lifeline.

The Carer Support and Dementia Advisory service launched by Hampshire County Council in association with Andover Mind, is another important way for people to get help and advice via phone, online and face-to-face contact with a trained dementia advisor.

There is no doubt that we need to change the way we think, act and talk about dementia, and although the likelihood of developing dementia increases significantly with age, early or young-onset dementia affects thousands of people under 65.

And we are now hearing a great deal more about the potential link between concussion and dementia.

On the DCMS Select Committee we are looking at links between sport and long-term brain injury. We have been hearing evidence from professional sports men and women, sport governing bodies and organisations, as well as from medical experts working in this complex field.

There is certainly a new sense of urgency regarding these concerns, and we must look carefully at all the data and evidence to ensure the welfare of both professional and amateur paters in these sports.

We know research is crucial to understanding and tackling dementia.  In 2017, the Government launched the UK Dementia Research Institute, in partnership with the Alzheimer's Society and Alzheimer's Research UK, with £290m funding - the single biggest investment ever made in the UK in this field.

The Government is also supporting the £79 million Accelerating Detection of Disease challenge, a project bringing together the NHS, industry and leading charities to support research into the early diagnosis of disease, including dementia. And there is a determination to ensure that the commitment to double research funding to over £160m each year by 2030 is delivered as swiftly as is possible.

The Alzheimer’s Society has spearheaded the formation of Sport United Against Dementia (SUAD), which brings together representatives from professional sporting bodies, governing organisations and clubs as well as individuals to tackle dementia collectively.

And it continues to expand its broader Dementia Friends initiative, which has been pivotal in increasing public awareness and understanding of dementia, with more than three million people having joined the scheme.

I have been privileged to help run Dementia Friends awareness sessions, and I would urge anyone with an interest to join up and learn about the practical, and often small, things that can be done to help those with the condition."