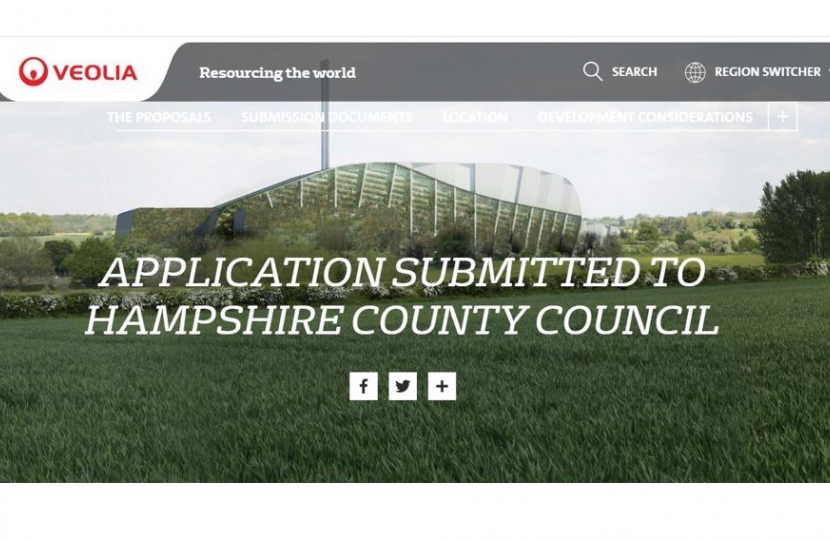 Local County Councillors, Mark Kemp-Gee, Andrew Joy and Adam Carew, together with Damian, have indicated that they will each be lodging objections to Veolia’s plans to convert its site on the A31 near Alton into an incinerator.

Hampshire County Council (rather than East Hampshire District Council) will be determining the application in its role as Minerals and Waste Planning Authority. Veolia submitted its application to the County Council last month and, having now had the opportunity to consider that application, the Councillors and MP said that they wanted to support many of the concerns raised with them by residents about the proposal.

“The scale and scope of the building, with a roof height of 40 metres and two 80-metre chimney stacks, in that countryside setting is, in my view, totally inappropriate and will have a distinctly adverse effect on the local communities that I serve.”

“Many Alton residents are concerned about the possible impact in terms of noise, odour, atmospheric emissions, light pollution and increased HGV movements.  It is vitally important that these and other environmental factors are all carefully scrutinised during determination of this application.”

“This application is in the wrong place; it is for commercial not domestic waste.  The sheer industrial scale of the plant so close to the National Park plus the associated lorry movements through our towns and villages is unacceptable.  Incineration may be preferable to landfill but air pollution is now a national concern.  It must be opposed.”

“As the facility is intended to operate 24 hours a day, seven days a week, over a period of about 30 years, it is important that as many members of the public as possible participate in the current public consultation so their views count in the decision-making process.  For this kind of facility, I believe there must be more suitable locations than here.”

Members of the public have until 14 August 2020 to submit comments on Veolia’s application to Hampshire County Council.  All interested residents are urged to make their views known to the Council, which can be done by going to the Planning section on the Council’s website (hants.gov.uk) and locating the application under reference number 33619/007.

Against the A31 incinerator

Damian has continued to outline his objection to Veolia's plans to convert its current recycling site on the A31 near Alton into an incinerator.