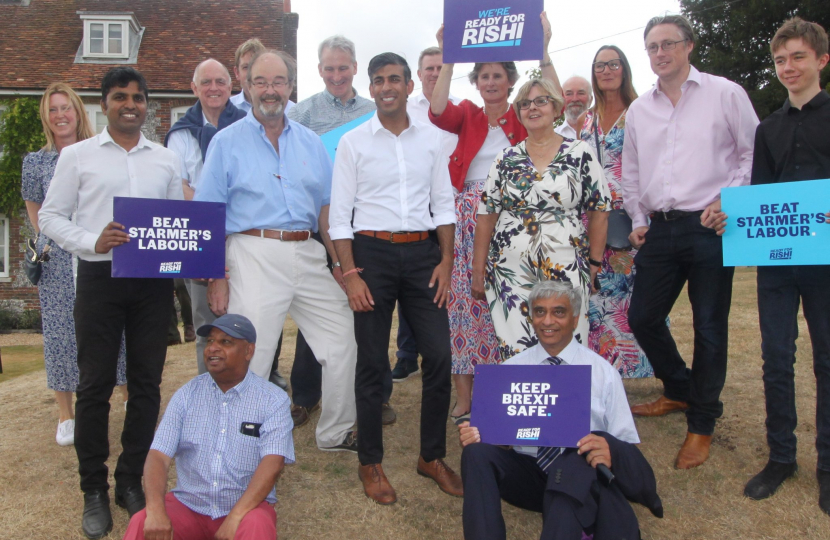 "Conservative leadership contender Rishi Sunak came to South West Surrey and East Hampshire on Saturday, to hear more about local issues and meet party members. The meetings – at Wilfrid Noyce Community Centre, Godalming, and in the Ropley countryside – were two of six campaign stops for the former Chancellor that day.

Hundreds of Conservative party members attended the meetings. At each, Rishi Sunak gave a short speech, then took questions on a wide variety of topics and spent time discussing people’s individual points one-to-one. Subjects raised included the economy and cost of living, the NHS and social care, and support for small business.

At Godalming, Rishi was welcomed by Jeremy Hunt and Guildford MP Angela Richardson. He joined Jeremy on a walkabout at the Farmers’ Market, meeting local people and business owners. At Ropley, he was introduced by East Hampshire MP Damian Hinds, along with Meon Valley MP Flick Drummond.

Rishi Sunak said: "It was great to be out and about in South West Surrey and East Hampshire at the weekend. "Supporting our town centres and maximising opportunities for British farming are both high on my list of priorities. I have already set out ambitious plans to rejuvenate our high streets and back our farmers and domestic food production. "It was great to discuss these issues, and much more, with party members, local residents and businesses."

Jeremy Hunt said: “Rishi got an exceptionally warm welcome in Godalming where many undecided Conservative party voters came out of the meeting strongly backing him. There was a strong feeling that there is still all to play for in the contest”

Flick Drummond said: “It was good to see so many people turning out for Rishi. I am supporting Rishi because I believe that his integrity and intelligence alongside his experience during the pandemic where he supported businesses and people makes him an excellent choice for Prime Minister.”

Damian Hinds said: “It was brilliant that Rishi was able come to East Hampshire in a packed schedule. Members were clearly impressed with the clarity of his programme, his personal warmth and strong purpose. On the day that he set out his vision for rural Britain and agriculture, it was an ideal time to be in our area.”

As part of a series of short videos promoting the many reasons to visit and enjoy East Hampshire, Damian’s latest one is all about the local entertainment, festivals and events that take place locally.