Progress since COP26 and the challenge ahead 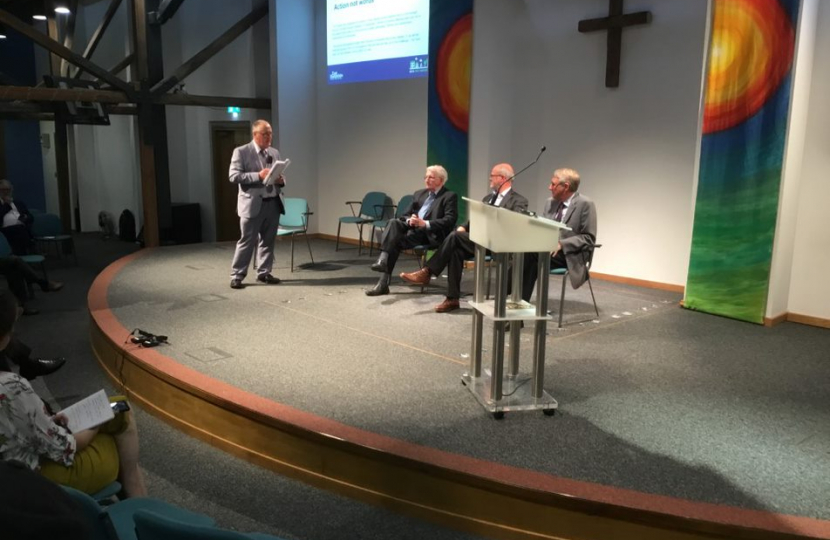 "It is a year since COP26 East Hampshire at the Alton Maltings, and almost a year since the main COP26 in Glasgow.  It is a good time to reflect on the progress being made – and the scale of the task ahead.

Our local event was an opportunity to share the findings and recommendations of the three Action Groups that had been considering both steps that could be taken to accelerate decarbonisation efforts locally and what to press for in wider reform.

The subjects for the three groups were transport, buildings, and land use & agriculture.

These were selected in reflection of their particular significance in a rural area such as East Hampshire, with a greater reliance on cars and longer distances to travel, older housing stock, the importance of farming locally, and of course a lot of land.

These three groups did a very thorough job, ably led by committed chairs.  I want to thank them again for their work.  Their reports were also submitted to ministers.

In June this year, the UK’s Committee on Climate Change (CCC) published their report on the overall progress being made to Net Zero, stating that the government has a solid strategy in place, but important policy gaps remain.

Priorities for both transport and buildings look to be the hardest of the government’s planned trajectories to deliver against, with the report stating that rates of improvement in building energy efficiency continuing to fall short of the necessary level and the development of charging infrastructure for electric vehicles not making fast enough progress.

Data for the five years to 2019 suggest that East Hampshire has decarbonised faster than the national average.  There was also a fall in overall emissions locally of 19 per cent in 2020 – but as noted above we cannot read much into that year.

The government’s delivery plan for transitioning to zero emission cars and vans sees a commitment to ensure all new car sales are zero emission by 2035, with the UK also phasing out non-zero emission HGVs by 2040.

Charging infrastructure is critical, and the number of charging points in East Hampshire has increased somewhat over the year.  We need to go further, and the publication of the Electric Vehicle Charging Infrastructure Strategy in March this year set a target of reaching at least 300,000 public chargepoints nationally by 2030; that would be a step change in availability.

Older housing stock does present challenges in terms of retrofits and upgrades, but the government’s Help to Heat scheme continues to focus on programmes to help ensure homes are warmer and cheaper to heat.

I was pleased to see new funding announced recently for the Social Housing Decarbonisation Fund, and further funding for the Home Upgrade Grant to help local authorities with low-income off gas grid homes.

The careful balance of how we protect and use our land sits at the heart of the Land Recovery and Local Nature Recovery schemes.  East Hampshire District Council has its own ambitious commitment on tree planting, while nationally the Trees Call to Action Fund offers grants for woodlands expansion projects.

There are other areas, too, key to decarbonisation, and the biggest of them all is energy.  The UK’s record on decarbonising electricity is among the strongest in the world.

We’ve seen a further positive shift this year, with 55 per cent of the total in Quarter 2 being low carbon (renewable and nuclear), and the use of coal down further from its already small percentage.  The National Grid reported in August that renewable generation had hit the highest day share ever at 85.1%.

Offshore wind has been a particular UK success story – we are in fact the world leader offshore wind deployment.  I also support the case for onshore wind, so long as it is done at appropriate scale and with public support. It is very noticeable that in our near neighbours France, Holland and Belgium (and elsewhere including America) that there is a much greater presence in wind turbines, but we must of course balance this against other environmental protections and priorities.

As it was at the event last year, this is a snapshot of where we are in one moment in time, but we know a great deal more about the direction we’re heading in and the steps and commitment involved in getting to Net Zero.

We need to keep going, and again I would like to thank the many local community groups, who not only contributed to the Action Groups work and event last year, but also continue to develop and deliver climate action innovation and inspiration across East Hampshire."