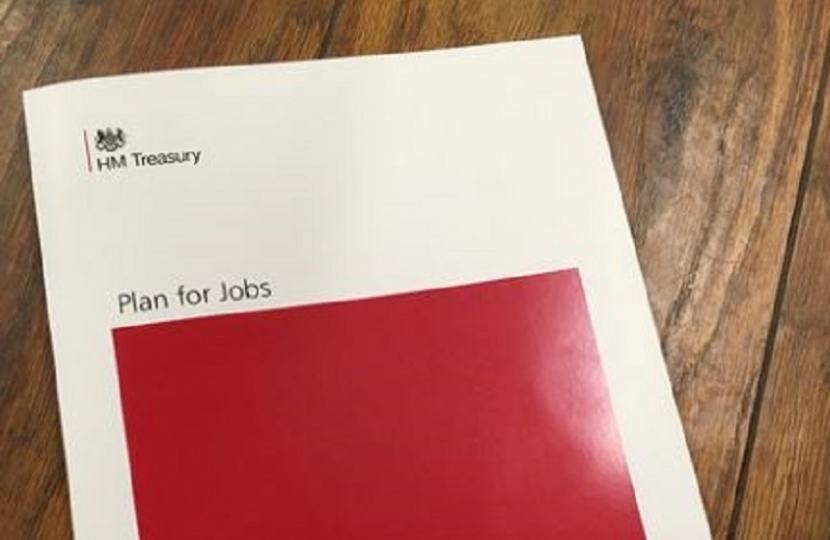 Damian has welcomed the Plan for Jobs set out by Chancellor Rishi Sunak this week, which outlined a range of initiatives to help re-vitalise hard-hit sectors upon which many jobs depend.

Building on the support provided by the Job Retention Scheme and Self Employment Income Support Scheme, which helped support more than 16,000 jobs across East Hampshire, the Chancellor has now set out the second phase of the Government’s response, focusing on jobs. The £30 billon Plan for Jobs follows the £160 billion support already provided to protect jobs, incomes and businesses during the pandemic.

Employers will be encouraged to retain staff who have been on the furlough scheme, with the Government paying a one-off bonus of £1,000 for every employee who was furloughed and who is kept on until January.

VAT will be cut for six months for all businesses in the hospitality, accommodation and attractions industries, including up to 545 across East Hampshire, and a new Eat Out to Help Out Scheme, giving people up to 50 per cent off meals out at restaurants, pubs and cafes on Mondays, Tuesdays and Wednesdays in August. Up to 200 local accommodation and food services businesses could benefit from the move.

“I know how important government support has been over the past few months and having worked almost all of my pre-politics career in hospitality, I know how important this next phase of support will be for the sector. Hospitality and tourism is key for the UK-wide and local economy, and I have followed developments in this area closely through my work with the DCMS Select Committee.  As a former yield manager, I understand why the Eat Out to Help Out August programme focuses on mid-week business - it will be essential for outlets to be able to smooth out demand across the week, given the capacity constraint at weekends.”

The move to help create jobs will be boosted by the temporary removal of stamp duty on all homes under £500,000 until the end of March 2021, and the £2 billion funding of a new Green Homes Grant, funding at least two-thirds of the cost of upgrading the energy performance of homes – up to maximum of £5,000. Low-income households will be eligible for 100 per cent of funding, up to £10,000.

“These measures will be important to people here in East Hampshire, where we have very active green community groups. It builds on what was already one of the most ambitious and far-reaching investment programmes we have ever seen. Carbon capture and storage, the nature for climate fund, investing to further the support for electric vehicles, new charging stations, tackling air quality, taxes on polluters—these are all measures that have already been acted on.

“We have decarbonised faster than almost every other European country, and this new scheme will help reduce carbon emissions from our housing stock, which today account for almost a fifth of all our emissions.”

And the new Kickstart Scheme, which will pay businesses to create new, high quality jobs for 16-24 year olds, will cover 100 per cent of the National Minimum Wage for 25 hours a week, for six months – for a grant of around £6,500 per placement.

There will also be £1,000 payments to businesses to take on Trainees, with the aim of tripling the number of Traineeships for 16-24 year olds, for which the eligibility will also be expanded. And £2,000 paid to employers for each new apprentice they take on under the age of 25, and £1,500 for any apprentice aged over 25.

“I have supported the idea of extending apprenticeships and I welcome the new Kickstart Scheme. We know that youth unemployment has a 'scarring' effect that can last a long time into adult life.  We also need to really encourage firms to offer industrial placements for the new T Levels, which start this September - this is part of our major upgrade of technical and vocational education and key to our economic future.

“The Sector-based Work Academies and the Flexible Support Fund are two of the lesser-known success stories of the work of DWP.  Having had responsibility for both when I was Employment Minister and seen how well they work, I am delighted to see the big increase in both of these programmes.”

Disinformation: a lesson from America

This article was written by Damian and published in the Herald group of papers on the 30th July: