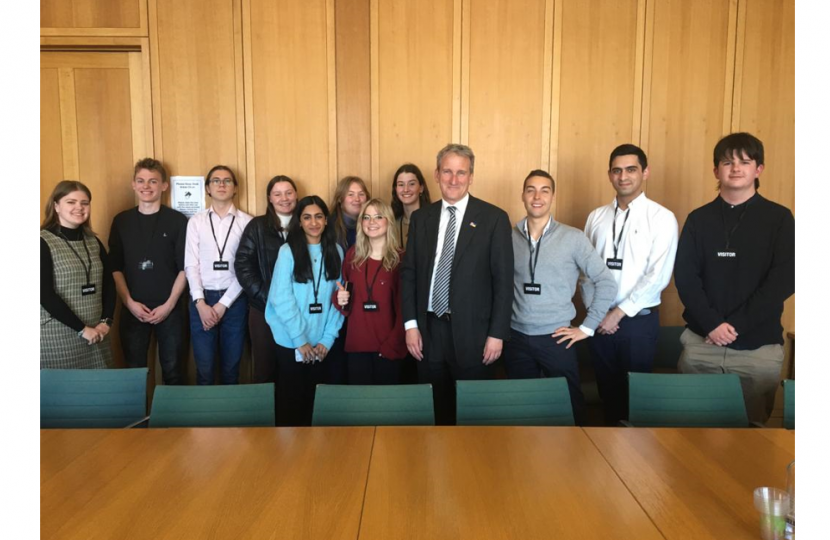 This article was written by Damian and published in this week's editions of the Herald and Petersfield post:

"It was great to welcome a group of East Hampshire sixth formers and undergraduates to Westminster last week, for a ‘Taste of Parliament’ day.

Although I have been hosting these for a number of years, this was the first we’ve been able to run since the start of the pandemic, with access to the parliamentary estate fully open once again.

Designed to give local students a flavour of life in Parliament, the programme offers a short insight to the workings of Westminster, and particularly how the work of MPs is complemented by a range of specialist teams. MPs are actually a relatively small minority of the  workforce in Parliament.

Most of the students are doing politics at either A level or as part of a degree, and are familiar with many of the parliamentary practices. But it can often be surprising to see the complexities that lie behind.

It can be bewildering, and certainly a steep learning curve for any new MP. Even as someone who had always taken a very close interest in politics, I still found much of the procedure complex (some of it almost baffling) when I arrived in May 2010.

Being able to see live debate and discussion in the Chamber, and to talk in detail about voting systems, protocols and legislative procedures certainly brings Parliament to life in a very different way.

Coincidently, this visit was on a day I was being quizzed by a Select Committee about fraud (part of my ministerial responsibility), so the students also had a brief view of cross-party scrutiny of government policy in action.

The various teams that the students met on the day work primarily behind the scenes, without much of a public profile. Yet they are integral to how Parliament works.

One of the highlights is the presentation by the Hansard team – the small but highly skilled group that records the spoken word across debates and committees held in Parliament.

Reporting every single word that Members say, which can require judicious editing, is no mean feat and requires a very particular skill in understanding the intricacies and nuances of language, and a sharp appreciation of accent and dialect.

This work is important, not only as an accurate record for parliamentary procedures, but also for public scrutiny. Hansard transcripts can also be used in a court of law to resolve legislative disputes, so accuracy is key.

The students also met staff from the House of Commons Library; a 200 strong resource that provides impartial briefings for MPs right across the House, drawing on the expertise of many subject specialists and researchers.

Their mission is to support an informed democracy “to help MPs and their staff scrutinise legislation, develop policy, and support constituents”.

The briefings cover the full array of legislative subjects – from housing to immigration, from foreign policy to health, from sport to climate change. MPs and their staff rely on these heavily. What may be less well known is that these publications are also available to the general public, and a wonderful resource for all.

Next up were members from the Parliamentary Archives team; guardian of items such as the death warrant of Charles I, the Bill of Rights, and legislative documents dating back to the 1500s, as well as original sketches done for the design of Big Ben.

Another hidden gem of Parliament, the Archives are also open for visits by the public.

As well as ‘Taste of Parliament’, I am so pleased that many East Hants schools at both Primary and Secondary visit Westminster each year, and many adult constituents also come and make the tour or come to watch proceedings in person. You can get info on visiting Parliament on my web site.

The physical imprint of Parliament may appear at times old fashioned, with some archaic language and procedures, but there are (usually) reasons for things that at first appear odd or outdated.

It’s far from perfect, but our Parliament continues not only to manifest our own democracy but to act as a symbol for democracy, free speech, and debate in the world.

It belongs to everyone in Britain, and it is important it’s accessible for all."

The Government is committed to creating 3 million high quality apprenticeships by 2020, giving thousands of young people a chance to make the most of their talents and gain new skills, whilst working an

Damian does a regular update for Petersfield's Shine Radio. The latest one is available below: