A balanced approach in the Budget Statement 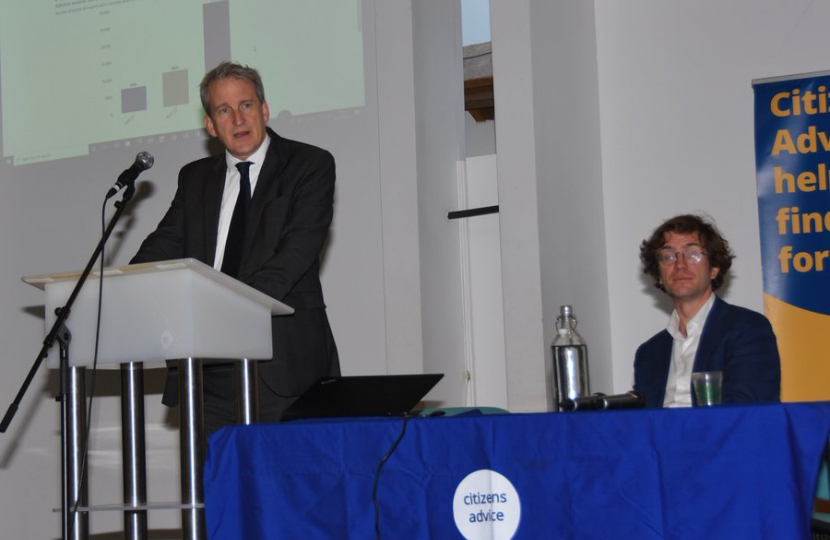 "On Friday I joined the East Hampshire Citizens’ Advice Bureau AGM at the Maltings in Alton.  CAB is a brilliant organisation, which is all about giving practical help and advice to those in need of it.

At the heart of each branch are the volunteers – over 60 in East Hampshire’s case – who give of their time and accumulated experience.  Their work is invaluable, but they also have a unique insight into pressures, and identifying where things are working well and where they aren’t.

The theme of this year’s annual meeting was of course issues around the cost of living, and I was very grateful for the opportunity to hear from them, as well as to discuss the Autumn Statement.

In the wake of the economic disruption from Covid, and Putin’s invasion of Ukraine and weaponisation of energy, we are seeing great economic pressures.  Inflation and interest rates are far above recent historic norms in many countries.

The independent Office for Budget Responsibility confirms that Britain is in recession.  But it is an unusual recession.

Inflation is its highest for 30 years but unemployment is around its lowest for 40 years (and lower still locally in East Hampshire).  The OBR does expect unemployment to rise next year and peak in 2024, but at levels lower than we have seen in previous recessions.

We also enter this time with the Employment Rate at near record highs: 75.5% (the high was 76.6%, just pre Covid).  That’s well above 2010, and bear in mind these days there are many more people going into Higher Education.

We are six years in to the National Living Wage, which has done a lot to raise low pay. Last week the Chancellor announced it would rise further to £10.42 an hour in April, its largest increase.

The welfare system has been reformed.  Universal Credit isn’t perfect – no benefit system is – but it is much more flexible and responsive than the legacy systems.  The Chancellor confirmed that Benefits will be uprated in line with inflation.  The Triple Lock on pensions is also honoured again – it has done a lot to tackle pensioner low incomes.

There is today more help than previously on childcare, with the 15 hours for 3- and 4-year olds, the extra 15 hours for working parents, tax-free childcare, provision for disadvantaged 2-year-olds; and the higher reimbursement rate under Universal Credit.

Support to families and businesses during the pandemic kept millions of people in work and with an income.  That kept unemployment off had been predicted to reach 1980s levels.

Now the cost of energy has put a massive strain on the public purse as well as family budgets.

These were both the right thing to do, but they do come with a very large price tag.

There is no avoiding that the Chancellor was faced with hard choices – but he has taken a balanced approach, making sure that, even with the great strain on the finances, there is additional funding for our NHS and schools.

He also stressed, rightly, that we need to prepare for the future, to ensure we are well placed to take its opportunities.  Part of that is focusing on how to support people who became ‘economically inactive’ during the pandemic to return to the workforce.  There were important commitments, too, to R&D, investment and infrastructure projects, which we know are needed to provide the right platform for growth.

Fiscal responsibility obviously means balancing our budgets over time.  If the government did not address the deficit we’d see further interest rate increases; funding public services by borrowing in the end is an illusion.

But of course support continues to be essential in what is an uncertain time.  So I do also welcome the energy costs support, and cost of living payments, and the extra £1 billion of funding to extend the Household Support Fund – distributed by local authorities – for another year.

The three really fundamental things are to deal with inflation and avoid a wage price spiral; to protect jobs as much as possible; and to pay the most attention to those who are the most vulnerable.

There was rigour and discipline at the heart of last week’s commitments, which I believe gives hope that we have a strong plan to get through this difficult period, and a platform to build for growth ahead."